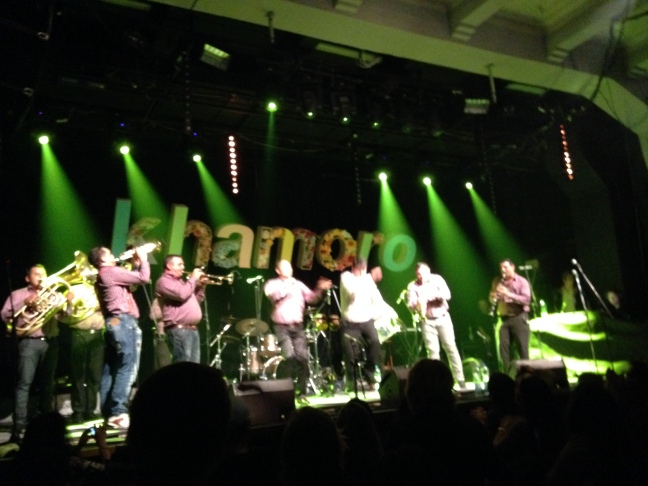 In honor of my last guitar lesson of Moravian folk songs that will take place this coming Monday, I would like to dedicate this post to the wonderful things I have learned about the Czech Republic through its various cultural outlets. Just like the history of this small country, its cultural production goes back quite far and I’ve come to see that it is pretty reflective of the unique quirks and world perspective that makes the Czech Republic the Czech Republic and Czechs Czech. Did you know that the first president of post-Communist Czech Republic, Vaclav Havel, was a poet? Or, that two women, a writer and operatic singer, are featured on the 500kč and 2000kč banknotes (respectively)?

Compared to the large, diverse, and modern USA, it has been cool to live in a country (and specifically, a region) that is so united over and proud of its culture and language. Even at my students’ end of the year party they didn’t have a DJ or stereo, but rather a cimbálka group to sing traditional Moravian songs. All year people have told me how lucky I am that I grew up learning English. Yet, in the USA we do not really value our language at all and we more often look towards contemporary culture than dwell on the “old” and traditional. In Czech history, there were periods of time where the people almost gave up on the Czech language in favor of German. However, like so many other seemingly small traditions, holding on to the Czech language proved an important way of remaining strong through various monarchies, dynasties, wars, dictatorships, political systems, or simply, freezing cold winters.

Earlier in the year I received the book Babička (1855), or “The Grandmother,” from one of my students. Božena Němcová (500kč note), one of the most famous Czech authors of the Czech National Revival era, is the author. The novel describes traditional Czech life and centers around one of the most respected figures in Czech culture, the grandmother. The Czech babička holds a special place in the family. She is the holder of wisdom and life’s secrets, the best cook, the ultimate caregiver, and moral compass. Nemcová’s babička is based on her own grandmother and is the epitome of this image as she sticks to her simple traditional life and enchants those around her with her outlook and life stories. Although I’m only halfway through the book, I can see a lot about the relationships of Czech families I have met this year and the position of the babička that still holds true today.

Last night I finally watched the Czech film, Pelišky (1999), or “Cozy Dens.” The Czech Republic very proud of their film industry, which is famous for producing many Czech films each year, highly talented dubbing of foreign films, and hosting many foreign film companies on location all around the country. Throughout the year I had been told Pelišky was almost the equivalent to It’s a Wonderful Life at Chirstmas for Americans and that it truly shows the Czech character in the context of the 1968 Prague Spring and Soviet Invasion. I definitely have to agree after all that I have observed this year.  Even some of the cynical attitudes towards Americans and the “West“ that are mentioned in the film hold true today. Most of all, one of the most refreshing things about Czech culture is that very little is sugar-coated—life is what it is and sometimes there isn’t a happy ending. People must simply try to get by the best the can.

Many of the Czech songs I’ve learned in my guitar lessons have echoed this sentiment.  Overall, my guitar lessons have been quite insightful on several levels. First, I have learned to play the guitar. Second, I have learned new Czech words and how to sing in Czech. Third, I have been able to participate and sing at various events this year where these songs were played. And fourth, I have picked up on these interesting aspects of traditional Czech life and perspective.

Last weekend I went to Prague to meet some of my Fulbright friends and go to the Khamoro World Roma Festival. Interestingly, there was the International Prague Heart of Nations Festival at the same time to celebrate ethnics and minorities in the main square. On Friday night, we went to the Khamoro festival concert at one of Prague’s clubs, which was amazing! There were two bands of more traditional Roma/Balkan style music and then the last group was a flamenco troupe from Spain. The entire atmosphere was great but the flamenco was more dramatic and passionate than I had ever seen before (even in Spain!). As I looked around the hall there were several Roma groups of spectators, but the audience was predominantly white. Even the mayor of Prague was present. In the end, I guess music and culture can be a good way to smooth over problems, or at least forget them for the length of a song.

2 thoughts on “The Land of Culture”