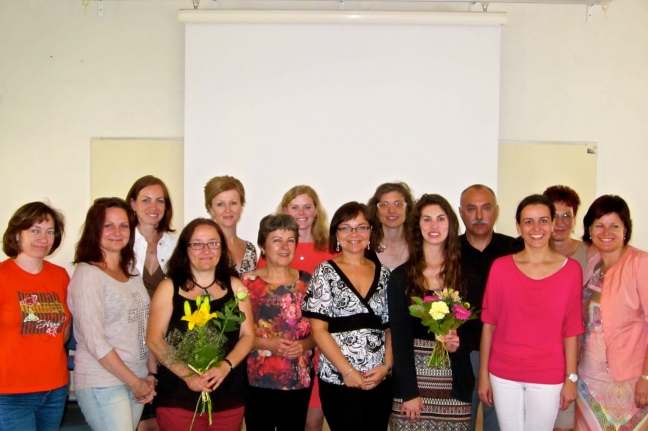 The past week was extremely busy with the last official week of school, saying many goodbyes before the start of summer holidays, and moving out of my flat by the end of the month. While packed with all good (and of course a bit sad) things, I’m happy now to have a more relaxed week before my one week of summer camp counselor-ing and then coming home!

Saying goodbye meant bringing a lot of people together, but of course a lot of emotional realizations that the people I have become accustomed to seeing every week will soon be very far away.  It felt impossible to thank everyone for the little things they have done for me, especially when there are so many people to thank.  This was definitely the case for the group of 12 wonderful teachers at my school. I made each of them a hand-painted card and wrote a personalized note based on our experience together, yet I felt this was barely enough. However, I have realized that expressing emotions, especially in writing, is a very unusual thing. All of the teachers were extremely touched and even shocked that I had written something different for each person. After trying to be strong and positive all year, it felt nice to really tell them how much it meant to have such a wonderful support system at school at the times when I felt so alone.

Before moving out of my apartment it was fun to have one American style going away party with my students. “Elizabeth and Mariel’s Goodbye Party” started out a bit awkward with many students who didn’t know each other, let alone feel comfortable conversing in their second language together, but then went on late into the night with some sad farewells. I think the most fun thing was exchanging American and Czech party games. I was introduced to the Czech game of macháček, which is sort of a dice version of the American card game “Bullshit.”  Both goodbye parties were so nice and I received many thoughtful gifts from the teachers and students to remember them and the Czech Republic. I now have full Czech song and movie lists to tackle and a lot of wine to drink before I leave.

The week of school goodbyes ended with the end-of-year meeting of all the teachers at my school. As I looked around the room, I really felt sad that I would be leaving such a wonderful community of people to work with. I was honored to be recognized by the headmaster along with the other teachers leaving for either maternity leave or retirement. Finally, I had to say some tearful final goodbyes to many of the teachers. Luckily, some post-meeting (10:30am) shots of the Czech Fernet liquor lightened the mood…only in the Czech Republic.

However, aside from all the emotional endings, the weekend was still filled with new experiences! On Tuesday Elizabeth and I ventured to the UNESCO site of Žd’ár nad Sázavou (try saying that 3x fast), a trip we had planned to take back in November! The main site, the Church of St. John of Nepomuk on Zelená Hora was really amazing to see.  The church features a lot of symbolism with the number 5 and generally about the death of Saint John of Nepomuk who was killed for refusing to tell the secrets of the Queen during a dispute. Every aspect of the layout of the church and surrounding complex revolves around the number 5, there is a tongue statue at the top of the church dome, and one of the three window styles in the church is also shaped like a tongue. All in all, we had perfect weather and it was nice to go on one last day trip.

To procrastinate the stress of packing up my apartment, I agreed to two fun activities on Saturday and Sunday. On Saturday I returned to the Czech beach town of Vranov (see September posts) and was able to see this summer place in full swing. Jana and family had invited me to go “yachting“ with their veterinarian on the dam and river. While the yacht was in fact a really beautifully large sailboat, we had a great day lounging and sailing for 3 hours and we even got to take turns driving!

Then on Sunday I agreed to go on a bike ride with my friend Tereza, her son, and professional bike racer husband. As I should have anticipated, the bike ride was a bit beyond my comfort level.  I think my last time on a bike might have been 1 hour in Berlin back in March 2012.  Well, our Sunday trip involved 30 km throughout the course of 5 hours through the National Park around Znojmo. I got to ride through all of my favorite places, which was beautiful, yet I definitely realized I need to practice my starting and stopping skills. Our bike ride ended with a huge hill and at the top it started to rain from an approaching thunderstorm. As we rode the last kilometer through the fields I wasn’t sure if I would die right then and there from body fatigue or being struck by lightening. Don’t worry I survived, but 2 days later my butt definitely still hurts! Cycling is extremely popular in the Czech Republic and throughout the area where we biked there were wine stands and restaurants with cyclists coming at from all angles. It felt a lot like ski resorts with all the people coming from different trails to stop and have a beer or something warm to eat. On the trails everyone shouted Ahoj or Čau (casual hellos) even if they didn’t know who each other were. While I’m not sure I would call myself a cyclist, it felt nice to join in the camaraderie and atmosphere for the day.

So now I have come full circle. I am back living and Jana’s where I started, just a whole 10 months wiser about the ways of the Czech Republic. When talking with Elizabeth, my fellow Znojmo foreigner, we agreed that the greatest satisfaction of this year is to know that we built a life here. After 10 months we have people, we know places, and we feel comfortable. The man at the tearoom knows my usual order, one of the guys from my favorite pizza place waved at me as he drove by in his delivery car, and I see my students all around town working at their summer jobs. I’m so lucky to have been welcomed into such a great community and with only 2 weeks left I know I will definitely miss it!

One thought on “Approaching Full Circle”