When I told most people where I was heading for Thanksgiving, North Dakota, the response I received from most people was a small pause followed by the grand question, “Why?” When a few of my friends first met my stepmom several years ago, they asked if her accent was from a foreign country. I found this funny, I could barely hear an accent and she’s not from a foreign country, she’s from North Dakota, USA. After making my second trip to North Dakota this Thanksgiving (really my first in full mature awareness), I definitely can say I felt like I was in a foreign country. Yet, this foreign country of mine felt perfectly familiar and perhaps, it’s just been lost somewhere out of the normal East Coast consciousness. 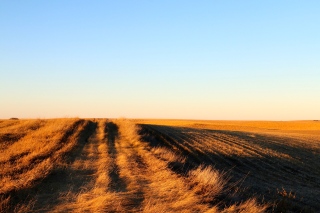 I was really looking forward to getting out of the claustrophobia of NYC, which made ND the perfect place because of the wide expanses, small population size and low-to-the-ground architecture. Seriously, the flat, orange-brown view of the prairie goes on for miles and miles. Finally, I felt like I could breathe and see the sky. Despite the literally freezing temperatures, the air felt clean and being outdoors did not feel like a miserable experience. One of the key lessons I learned in the Czech Republic came back into my head—the cold is not so bad as long as you have the right clothing! In NYC we try to get through the winter with sleek, stylish clothing, yet we spend more time outside, walking through wind tunnels to get around. Maybe New Yorkers would be less inclined to look down as they walk with scowled faces if we just wore appropriate winter clothing. 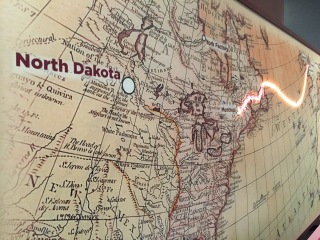 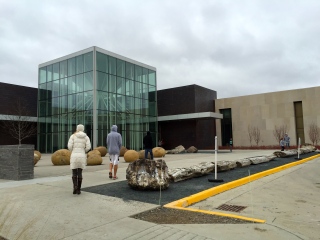 Our trip started with an “urban” day in North Dakota’s capital city of Bismarck. After a warm family welcome at the airport, we spent the day at the North Dakota Heritage Museum learning about the archaeological findings in the region and the Plains Indians. I had no idea how many dinosaur artifacts have been found in North Dakota! It was also interesting to see the exhibits about lifestyle and culture in North Dakota, much of which stems from European immigrant history. A lot of the traditional clothing, recipes and celebrations all seemed very similar to both my Eastern European background and also, my travels around Europe. Although this area of the country appears to be more homogeneous than NYC, I always enjoy seeing the histories of assimilation and cultural adaptation in any place as a reminder of where our patterns as a population truly come from.

The rest of the weekend was spent in my stepmom’s hometown of Carson, North Dakota, population 286 with our Thanksgiving group of approximately 25. Because of the frigid temperatures, we spent most of the day cozily inside with a huge Thanksgiving lunch, baking Thanksgiving-inspired treats, kids playing games in the basement and everyone playing lots of card games.

Some parts of the day were spent exploring outside, for example, with an excursion to go hunting. Although I am personally opposed to shooting a gun (when I tried 2 years ago, I involuntarily cried) and my policy attitudes towards gun regulations are pretty conservative (with a lower-cased “c”), it was interesting to see gun-use as means of subsistence, rather than an act of violence as it is usually portrayed in the news and political debates. The pheasant that I watched get shot was quite tasty. Visiting North Dakota was a deep look at the divide between rural and urban and how those contexts deeply shape how Americans perceive the world. Both with guns and then when discussing education, I came to realize that the sheer density and proximity of people in cities creates a lot of room for error in both policy areas that is harder to comprehend in smaller towns. Perhaps, this is the grand confusion between the need for more intrusive government and the trust in people to privately handle their problems. In an election year and as the gaps between Americans—rich and poor, rural and urban, Black, White and Muslim—seem to grow ever wider, it will be interesting to see whether there is something that can bring us together. 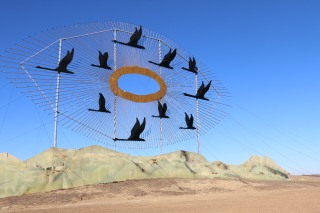 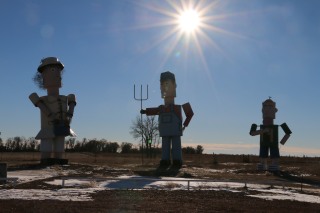 We spent Saturday driving down a stretch of road called the Enchanted Highway. A local artist who noticed the lacking attractions of the area began creating found-object sculptures that are literally larger than life. I think it’s impossible to drive down without a smile on your face.

Finally, on our last night, we decided to go to the town next to Carson, Flasher, for the Rodeo Club Dance. I found the idea very similar to how in the Czech Republic different community organizations have Plesy or dance events for members and their guests. With deer heads, cowboy hats and country music, this dance was slightly more Western though. Visiting North Dakota was a small introduction to an entirely different cultural world of rodeos, farming, church, family and sports that play such a central part of life. Especially living in NYC, the sense of community of being connected by anything is so thin that it was refreshing to see a different world where shared experience is so strong.

While a lot of East-Coasters and especially New Yorkers see our sliver of densely populated land as the center of the universe, I think beyond getting to see an important place for my family, visiting North Dakota was important for me to better understand our country. Current events make us constantly question what it means to be American. With 50 states and so many people, it is impossible to say who truly is and who has the right answer. However, I can better see now that with strong American traditions and literally, being so heavily connected with the land, North Dakotans, and people who live in other rural states, have a unique perspective and sense of American identity that is very different than those I usually talk with. As the world beyond our borders is constantly changing, it will be important to find the shared connection in our American values, if we hope to stand united against whatever challenges come our way.