Life’s been a little hectic the past month. With lots of travels and starting a new job, I’ve found it hard to find the time sit still and form a routine that allows time to think. Now it’s been a few weeks and my awesome trip to Asia with my dad feels far away. Before it fades into the craziness of the holiday season here are some memories of my spontaneous trip to the “Far” East:

Our trip started in Seoul where I attempted to tackle this monstrous city in 3 days. Luckily, I had some awesome recommendations and guidelines to follow from a few friends who have lived in Korea and a new friend who has navigated Asian cities for a lot of her life. Seoul is literally HUGE! The city seems to go on and on and on for as far as the eye can see. It’s a very interesting blend of old and new, city and nature, historic and modern, and East and West. I loved the mix of nature and city. As my first experience in an Asian city and culture, my first day wandering alone was pretty overwhelming. Compared to anywhere I have traveled before I really felt lost in translation with few signs in English or English-speakers.

It really is true that the most interesting stories come about when you are least comfortable and taking the biggest risks. I followed some advice and visited the Noryangjin Fish Market a little off the beaten Seoul tourist track. First of all, it took me about 20 minutes once I exited the metro to figure out where exactly the fish market was. After asking some women in a café I wandered over an overpass to enter the huge (and smelly) fish market. No tourists, lots of fish. For a while I wandered, then observed, and finally hand-gestured to figure out that you could buy fresh seafood and then bring it to little stalls on the side of the market where you could have the fish prepared to eat right there. I hand-gestured some more and ended up with a huge plate of raw salmon, sashimi style, which I then brought over to one of the stalls to eat. I was given some little side dishes, but the (large) plate of raw salmon was still there in front of me. So there I sat, dreading a ruined trip of mercury poisoning and attempting to waste as little salmon as possible, without throwing up. Good, and generally tasty, times…

As I have come to learn with all traveling, it’s always more fun to visit somewhere when you have someone to show you around. Luckily, a friend from university was able to meet me after work at the last minute, along with another new friend from William and Mary too! It was just my luck that they managed to cram as much of Korean nightlife into 3 hours, before they had to head home for work the next day. First, we went to Korean barbeque where we cooked meat on skewers and drank the traditional Korean liquor Soju, mixed in our cheap Korean beers. Next, we went to a bar and drank Korean rice wine called Makgeolli. Finally, we ended up doing Noraebang or Korean karaoke! I imagined a typical karaoke bar, became confused when we took our shoes off at the door, and then realized the amazingness of Korean karaoke: private karaoke rooms!! Really, it’s the greatest system—getting to sing without the embarrassment of doing it in front of strangers! So, the three of us rocked out in our private room and it was great J 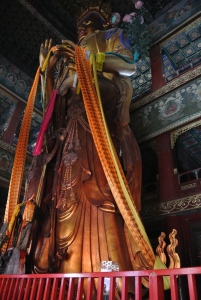 Next we ventured to Beijing where we spent the day soaking in lots of history and world famous sites sans all social media. We arrived right at the start of the APEC conference, which meant that China was on their best behavior. All factories had been shut down for a week to prevent pollution, and cars were limited to alternate license plates driving days, so we had no traffic! Beijing is jam-packed with major sightseeing and given that I haven’t taken an Asian history or architecture class since the 8th grade, there was a lot to learn. In 3 days we managed to see the Forbidden City (and relive the last scene of Mulan), slide down the Great Wall of China, visit the Temple of Heaven (twice), tour the Summer Palace, walk Tiananmen Square and see the tallest wooden Buddha in the world (made of one tree)!

Besides a historical tourist experience, Beijing provided a pretty cool culinary experience as well. I will say that beyond my salmon adventure in Korea, I loved Korean food! My favorite dish was bibimbap if you ever have the chance to try it. However, in China we got to be a little bit daring with our food choices. Of course, being in Beijing (formerly Peking) we had to have Peking duck—for both nights of our stay. One night though we also ventured to a night market where they had a big range of more exotic street foods. While some things were obviously delicious like the typical red Chinese fruit, Tanghulu, candied and on a stick, others were slightly strange to see, such as baby sharks, spiders, snakes, scorpions, starfish, and sea urchins. We ventured to try baby scorpions, basically just a lot of fried taste, and coiled snakes, over-cooked and flavorlessly crunchy. I think the mental block was the hardest part.

Because of China’s slightly forbidden and foreign mystique, it was really interesting to observe and learn more about the people of the largest population in the world. Luckily, we had an awesome tour guide team of Sophie and Mr. Sien to show us around. At the Temple of Heaven, we could see the retired elderly relaxing, playing cards and Chinese chess, exercising on public machines, doing pacing to music, tai chi, and singing nationalist songs in a public chorus. On the drive to a more remote section of the Great Wall we could observe the countryside and volunteer “security” sitting around with their red armbands amongst the seemingly “third-world” housing and agriculture. It was quite the contrast to the downtown high rises, luxury shopping, and booming economic superpower image that China projects to the world. China is definitely a complicated country, entrenched in a deep closed history that was fascinating to see in person.

The contrast between old and new that we began to see in Beijing was made extremely visible in Hong Kong. It truly is a remarkable blend of East and West, modern, old, ancient and serene. On the one side of Victoria Harbor there is Hong Kong Island, a metropolis of high rises and never-ending shopping malls that felt like NYC. Then across the water there is Kowloon, which felt like the hustling bustling Asian markets you would imagine from the movies. And then finally there is Lantau Island where we went to see “The Big Buddha” which was peaceful and full of tropical forest.

What an amazing place for the modern history of colonialism, as well. China gave Hong Kong over to the United Kingdom for 99 years, and then when the lease was up, it became Chinese territory again. As a result, our visit also is coinciding with the newest event in Hong Kong history: the Umbrella Movement. Perhaps you have heard of the student protests against the governmental system of a Chinese-influenced leader of Hong Kong, in favor of a true democracy. On our first day in Hong Kong, we walked around the currently occupied protest site of colorful tents, student activists, and free speech demonstration. In the reflection of the demonstration, I could see the influence of several other “revolutions” throughout history. A designated “Lennon Wall of Hong Kong” decorated with post-it notes called to mind the student-led Velvet Revolution in Prague. The tent village and “occupy” language echoed the Occupy Wall Street protests that started in NYC and spread around the world. The construction of metal fence barricades left me with the tunes of Les Miserables and its depiction of the French Revolution in my head. As the police and students are violently clashing in Hong Kong this week, I can’t help feeling proud of all of the young people throughout history who have been willing to risk their young lives for the larger historical picture of a country. Seeing the protest site exhibited the complexity of seemingly reckless behavior and that being revolutionary takes more education and planning than it seems.

Being in Asia was more culture shock than I have experienced in a long time. Compared to being in Europe or even Central America, I felt more out of my comfort zone. First of all, not being to read or sound out the characters made my usual plan of wandering around cities very hard. You can’t bank on trying to sound out words or even trying to see trends in the characters without much experience there. Then again, that’s what I thought about Czech during my first weeks in Prague… Also, for the first time in my life, it felt to strange to be somewhere that just from the way I look, I could be judged by not being from there. While in most places the give away is only once I open my mouth, every so often I became aware that there was no way to hide being an outsider.

Traveling to 3 different countries/cities in 3 days was a pretty big shock for me after spending 1 year getting to know one country and one culture. One of the most surprising parts of my trip was getting to spend with an experienced traveler while I was in Korea who pointed out the difference between being a traveler and being a tourist. After living abroad, it seems impossible for me now to visit a place and not care about learning the deeper roots, traditions, trends, and perspectives of the people behind and around the top 10 sights to see. In this way I don’t see traveling somewhere as an isolated experience. I hope to have a long life of traveling!

Going to Asia, the farthest plane ride of my life so far, really made the world seem much smaller. I’m excited to head back over there again soon! Now, back to the “West” for the holidays, my newly started job, and the start of routine!

2 thoughts on “…East and West”