After a whirlwind travel day(ish) of being in 6 countries and 5 airports, it was quite a shock to my system to meet my family in Guatemala. The plan had materialized months before when our friends in Guatemala planned their wedding for Thanksgiving. However, the change of going from Central Europe to Central America in approximately 24 hours was not insignificant. Suddenly, I was speaking Spanish, reunited with my family, wearing a skirt, and celebrating a major American cultural holiday in a foreign country. While I’d like to think that I could qualify as a jet-setter, there were still moments where I had to stop and take a moment to comprehend exactly where I was. The jetlag was also a good reminder.

Our Thanksgiving was pretty international as Guatemalan Thanksgivings go. There were my American parents, a new French friend, and our Guatemalan “family.” As a result, we spent the meal explaining what exactly we were celebrating and what we were eating. Luckily, the restaurant Epicure was serving an impressively authentic American Thanksgiving menu, except to our 6-year old buddy who opted for lasagna. In general, there seems to be little concept of where food of different varieties actually comes from—it’s just understood that the food is not typically Guatemalan. I was able to stay awake just long enough to joyously eat everything before crashing into a heavy jetlagged sleep. 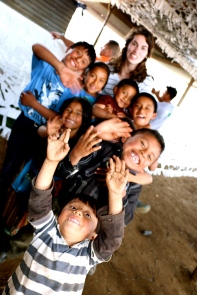 The day before the wedding, we caught a bus up to Santa Maria de Jesus; a village outside of Antigua where our friends are from. We spent the day helping with the wedding preparations, as they transformed their family complex into an open space for celebrating. My mom and I spent most of the time entertaining first the children and then the ladies in the kitchen. We had a long photo shoot, as it was unusual for these children to see pictures of themselves or see themselves at all without any mirrors hanging around for vanity or aesthetic. Then we read many books as it’s not necessarily assumed that parents know how to read even Spanish, let alone their indigenous language of Kaqchikel. 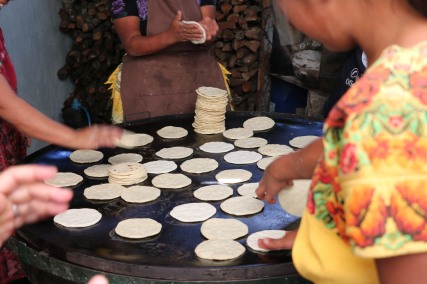 Next door, many of the ladies were already cooking in preparation for the festivities the next day. Turns out, making tortillas is way more difficult than patting dough between your hands. My mom and I were like a comedy act with the dough sticking to our hands and our inexplicable inability to produce a perfectly circular product. We were met with a mixture of giggling and disapproval as our attempts to help were hidden at the bottom or sneakily discarded. In an assembly line fashion, tamales were prepared as breakfast for the wedding guests the next day. As we left to a cheering crowd of children dancing and shouting “adios” I don’t think we could fully appreciate how much work there was still left to do. 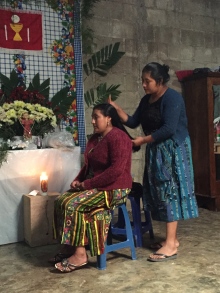 I wasn’t entirely sure what to expect from a combination Catholic and indigenous Mayan wedding and despite how many times we asked for clarification about the schedule and what we would be doing, our ultimate approach was just to go with the flow. We arrived early on Saturday morning in Santa Maria and caught the final preparations in the transformed living quarters. Now there were rows of tables, large speakers, and finally, the plastic ceiling decorations were fully in place. We left with Edgar and Juanita to walk with their parents, grandparents, and son to another house. We all sat around the perimeters of the room and watched as Juanita’s hair was brushed and wrapped and braided until it was complete with the final veil to complement her exceptionally vibrant traditional huipil and skirt. As we all stood, there was then a form of a pretty impassioned prayer circle.

Walking through the town through the church, people stopped and stared at the stressed bride and groom, who despite their smiles and beautiful attire, had been up all night taking care of the preparations. When we arrived at the church, a happy couple emerged at the end of their ceremony and then we had to wait for another couple’s ceremony before we finally approached the front of the church.

Overall, the entire day was very focused on religion. Even before the wedding, the couple had to attend a course about the sanctity of marriage and were repeatedly reminded about their sins of having a form of a common-law marriage previously when they started to have children. Overall, the day was very different than an American wedding in its focus on celebrating God, rather than the people themselves who are getting married.  After the ceremony, the couple walked around greeting the attendants who seemed to avoid their glance and look away. Compared to what we were used to, there was very little joy and happiness amongst the wedding party.

After the ceremony, the couple walked around greeting the attendants who seemed to avoid their glance and look away. Compared to what we were used to, there was very little joy and happiness with abandon that we are so used to on a wedding day. Even though the band was blasting music to the point that talking was impossible, there was no dancing, but simple solemn listening to the God-loving tunes. We did not attend the last events of the wedding in which the bride and groom received and then opened gifts, so we’ll never quite know if there was more of the familiar joy and merriment during those celebrations. 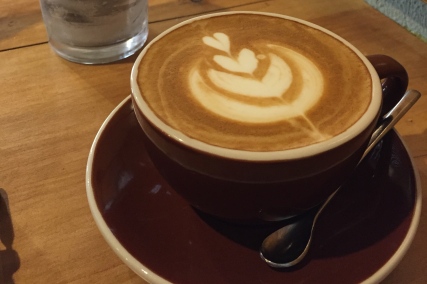 The three days following the wedding, before my grand entrance back to the USA, were a mix of stress and relaxation. I started working pretty heavily and had to deal with some administrative problems, which were frustrating to manage from overseas. I did manage some fun excursions around Antigua though for swimming with mom at the Soleil hotel, hiking up to Cerro de la Cruz overlooking the city, hanging out at the cool coffee shop The Refuge, eating fun-flavored ice cream at Sobremesa, and discovering some ruins on the outskirts of town.

My second to last night I went to Rainbow Café or their weekly nonprofit presentation. Even though all of our friends in Antigua have come through our volunteer experiences with the organization From Houses to Homes, it was fascinating to learn about another program, Safe Passage. When we arrive in Guatemala, we always exit Guatemala City immediately. However, learning about the community in the massive landfill there showed how the same issues of poverty, housing, education, and medical care we have worked to confront with FHTH exist in this environment as well. Check out either of these great organizations for your next meaningful travel experience.

Before heading to the airport, I went with our friends to go out to dinner and at their suggestion, found myself in an Austrian restaurant (yes, apparently, they do exist in Guatemala). Even though our friends had no understanding of the theme and thought I meant Australia when I mentioned it, I had to chuckle to myself at the irony of flying from Austria to Guatemala to end up eating Austrian food. Instead, we ordered pizza, lasagna, and margaritas, overlooking the other assortment of Guatemalan and Tex-Mex options on the menu. With a full belly, I barely stayed awake for my nighttime ride to the airport, but then found myself wide awake on my overnight flight. After 2.5 months, the lights of NYC were there shining at 3:45am to welcome me home.