Last month my dad and I took a long weekend trip to Toronto for several exciting reasons: his birthday, my restlessness and NBA All Start Weekend. For years, my dad has always wanted to go to the All Star game and finally, the stars aligned for us to go when it would take place for the first time-ever outside of the USA and for the first time-ever in freezing temperatures. I had never been to Toronto before; however, if I could enjoy my time there in -26 C/-15 F weather, I think I can say that I would enjoy visiting any time of year. 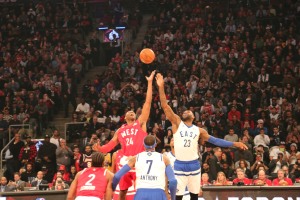 Of course the main event of the weekend was the NBA All Star Weekend. While I missed the Celebrity Game on Friday night, the Skills Challenge/Three Point Shooting/Slam Dunk Contest Event on Saturday was probably my favorite. Watching Aaron Gordon and Zach Lavine compete was amazing and while I think Gordon got gypped, it was still a remarkable matchup. While the All Start Weekend was naturally full of glamour—including a star-studded after party– I think my favorite part was that the event was more than just about bringing the best players of the league together. In addition, all of the mascots, dancers and even courtside mop-guys from across the league were there, as well. The entire atmosphere was very fun and full of camaraderie.

Outside of the arena, we managed to fight the cold and were able to spend the other half of our time sightseeing and eating + drinking our way through the city. With only 72 hours in the city, here was the breakdown:

Friday Night: A late night dinner at Buca for some extremely rich Italian food and swanky atmosphere. This restaurant was literally hidden down a dark alley that was only marked by a red light. The inside was inviting though and everything from the eggplant parm to the cauliflower side to the pizzas was delicious! 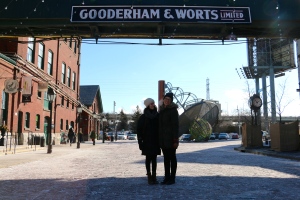 Saturday: The spontaneous trip to Toronto was extra exciting because I was able to see my fellow North American Znojmo friend in her home city! As my tour guide, Elizabeth brought me to a great brunch, St. Lawrence Market of indoor food and the Distillery District of chic local boutiques and artists studios. She also was able to guide me through my first taste of peameal and clarified that Montreal bagels are not just small regular bagels, they are denser and entirely their own sub-species of bagel. You probably can’t tell from the photos, but it was FREEZING outside, so we found a cozy restaurant called C’est What? (I thought this was a clever name) to play Scrabble and drink craft beers. To end a great and semi-nostalgic day together, we even rode the Toronto tram system—which has the same kind of tramcars as the ones in Prague.

Saturday Night: After the NBA contests of the evening, we ventured out to a bar found in 36 hours in Toronto article called The Dakota Tavern. Little did we know that there would be live music and that of all performers there would be Butch Haller. Although his website claims that he’s 90-years old, his spirit was definitely much younger as he played bluegrass covers for a crowd of young professionals until about 2am. Needless to say, everyone was dancing from start to finish.

Sunday: We started the day at The County General, where we not only had great food, but also great cocktails served by our new friend behind the bar. They recommended their fried chicken, which literally melted in your mouth along with some traditional eggs benedict. In addition, we learned that in Canada, Bloody Marys are replaced by Bloody Caesars made of clamato juice aka clam + tomato juice. Bloody Marys are not my thing, but I will say that this concoction complete with little pickles was definitely unique!

While digesting, we also stumbled upon a pop-up gallery about hip-hop and its influence on art, culture and fashion. Part gallery, part lounge, there were plenty of people hanging about taking refuge from the cold.

Next we ventured up to Bellewoods Brewery where I can safely say I had the best and most complex beer I’ve ever tasted in my young life. Each sip of my 3 Minutes to Midnight beer tasted like a bite of chocolate raspberry cake! All of the Bellewoods beer is homebrewed with homemade recipes. I would say that this is definitely a place not to miss on a Toronto trip.

Monday: For the last day of our long President’s Day weekend, we ventured up to Kensington Market. While this “Bohemian” neighborhood was quiet on this winter day, we could tell that it would be bustling in another season. The colorful houses, murals and vintage clothing hanging about pretty much looked like a dream I might have. We lucked out with finding Seven Lives Tacos y Mariscos. With 2 picnic tables and new friends for company, we thoroughly enjoyed each messy, flavorful, freshly made taco. I think the grilled octopus one was my favorite!

To finish off our eating tour, we also found a bagel place and took the chance to try some of these Canadian-style bagels. Yes, they were much denser and the everything bagel we tried was excellently toasted with cream cheese.

While our initial draw to the city was the gang of NBA All Stars, Toronto itself proved to be the true all star of the weekend. Full of young energy and creativity, Toronto was a happy surprise and a city I’d definitely love to visit again in whatever season!

If you’re interested to read another take on my trip to Toronto, check out my first article published on Pink Pangea.

If you’re learning English and are inspired to write about your own stories, check out ESL Write Away’s First-Ever Essay Contest! The deadline to submit is March 20th.

One thought on “Toronto All Stars”